Now that the Spring school semester has finally concluded, I have a lot more time to spend at my favorite place: the Baytown Nature Center! It was a beautiful clear evening, humid but with a strong breeze in most places. The first animal to greet us on this visit was, quite surprisingly, a raccoon! She had been standing at the water's edge, and quickly approached the nearby trash can. 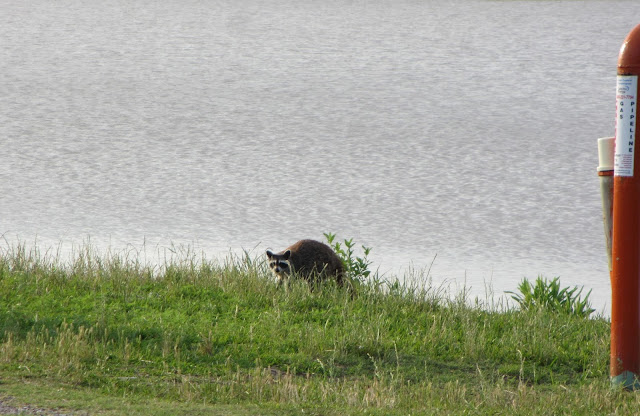 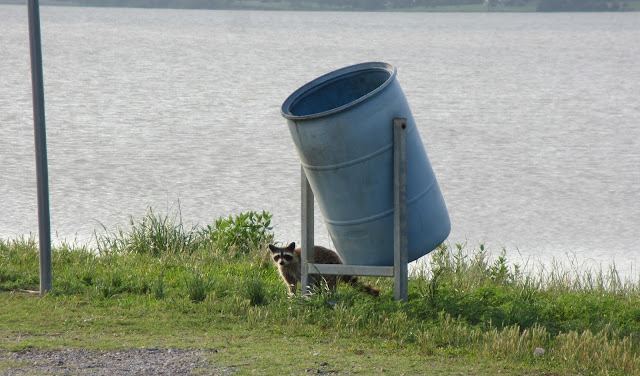 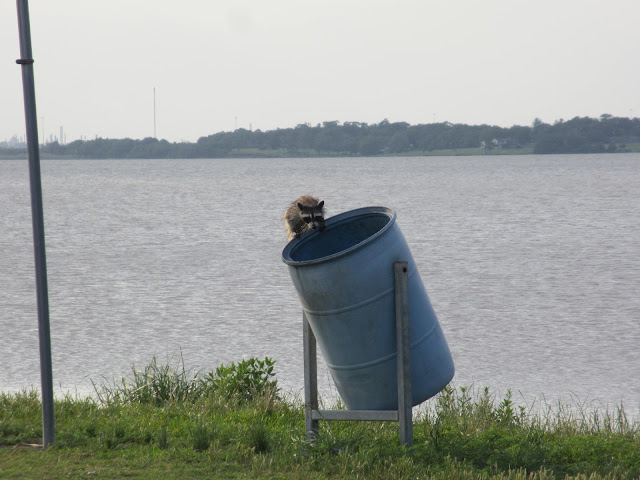 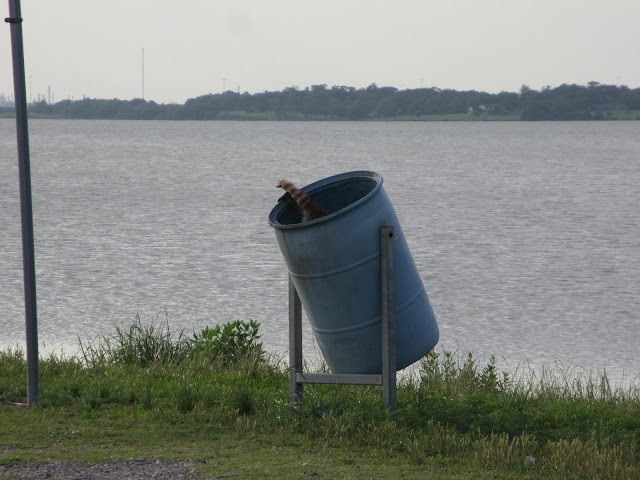 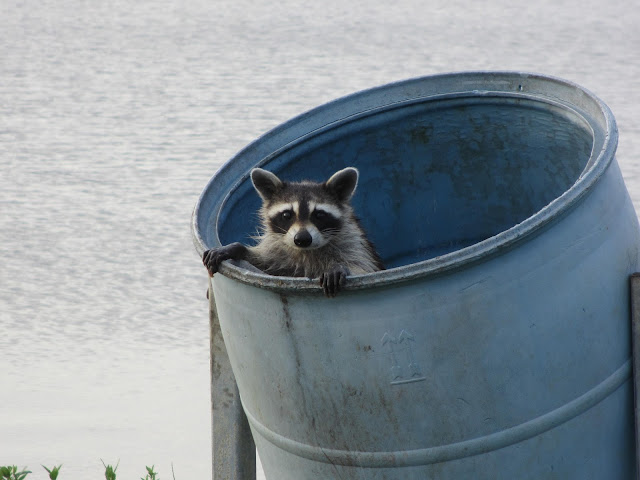 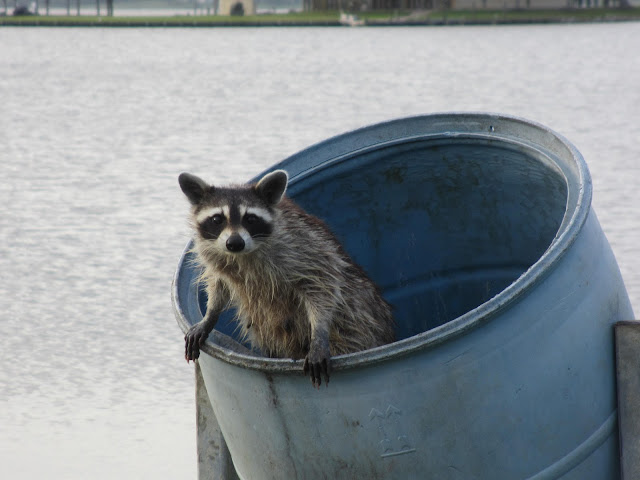 We had pulled over in front of the trash can after she had gone inside, and she wouldn't come out while we were there, just staring at us like this. After a few minutes, we went on our way so we wouldn't disturb her too much. This is one of the few times I've seen a raccoon out in broad daylight around here.

Just down the road, we saw a fight breaking out in a flock of Black Vultures standing around the road. The two or three that had been fighting flew away, but the rest of the flock (15 in total) stayed at the roadside, barely moving aside as our car pulled up. 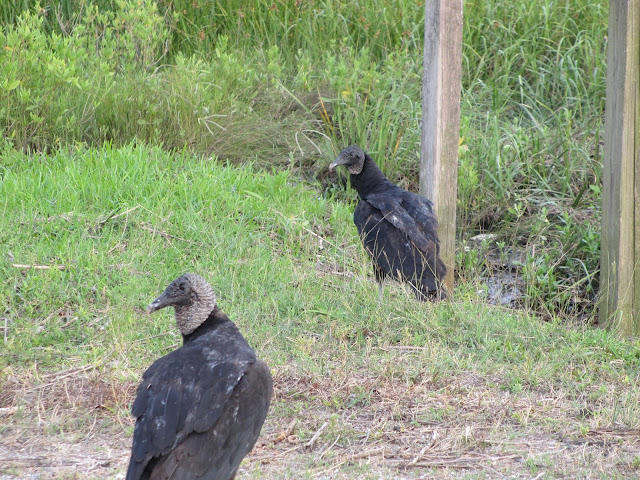 My brother Travis discovered that several of them were eating something in the nearby ditch. He went out to find that it was - interestingly enough - another raccoon! This one not doing so well as the one in the trash can.

Red-Winged Blackbirds were, as usual, out in abundance, the males advertising themselves with prominent perches and mechanical songs.

They're very big birds, a startling sight when I don't normally see them sitting here like this. They're somewhat common here in the Winter, but as Summer marches forth most of them migrate further north. 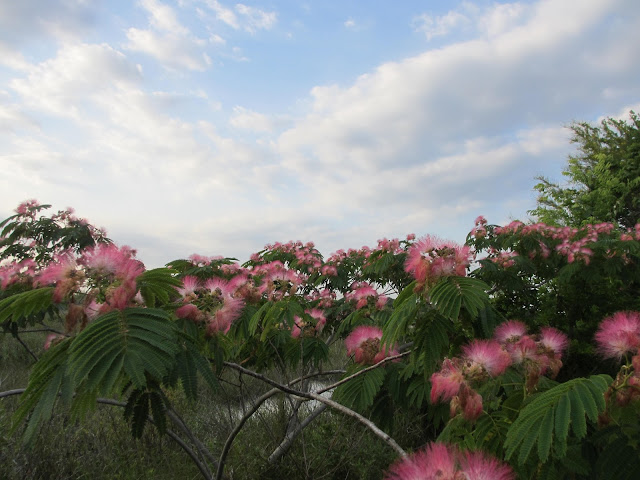 This tropical plant, with it's absurdly bright pink flowers, always entertains me somehow. I just found out now it's called a Powder Puff Tree, one of the Calliandra species. Examining one of the flowers, I noticed something really interesting: there were several small blue-gray inch worms on it. 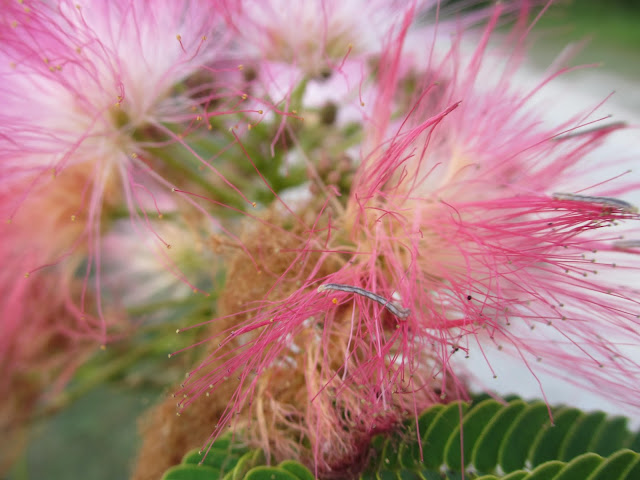 Closer examination led me to see that they were on several other flowers as well, clearly enjoying this plant. I have to wonder what butterfly or moth they turn out to be! I'll have to try and find out sometime. 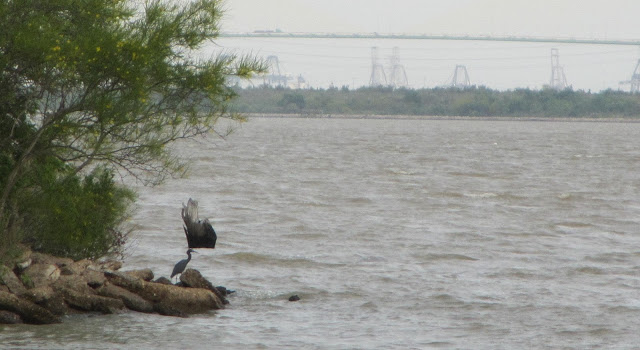 Herons were, as usual for the summer, very numerous. We saw eight different species today, all the usual residents: tri-colors, black and yellow crowns, great egrets and blues, snowys and cattles. You can spot this Little Blue Heron out on the rocks, overlooking turbulent Scott Bay.

Another species that was extremely numerous was the White Ibis: I saw over a hundred individuals during our hour-long visit. There's some sort of roosting area or rookery nearby, resulting in many, many ibis visiting the nature center and flying out to Scott Bay. They'll often fly right over your head, which is fantastic. 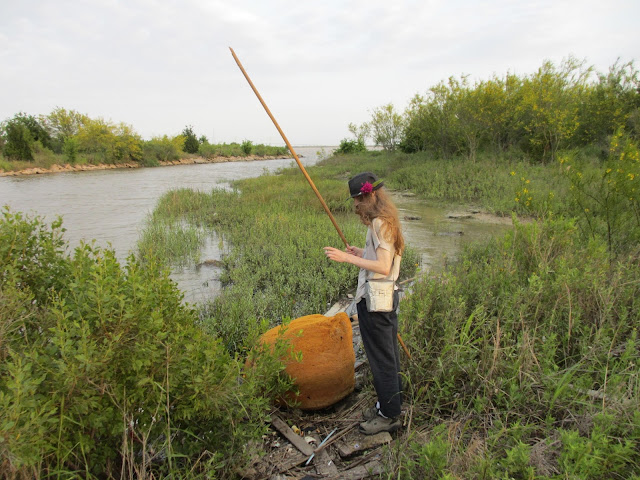 Travis insisted that I take a picture of this giant block of foam. Sadly, there's always plenty of trash washed up on almost every shoreline here. All sorts of detritus, big and small. Kooky inventors like my brother love to trawl the wreckage for odd treasures. 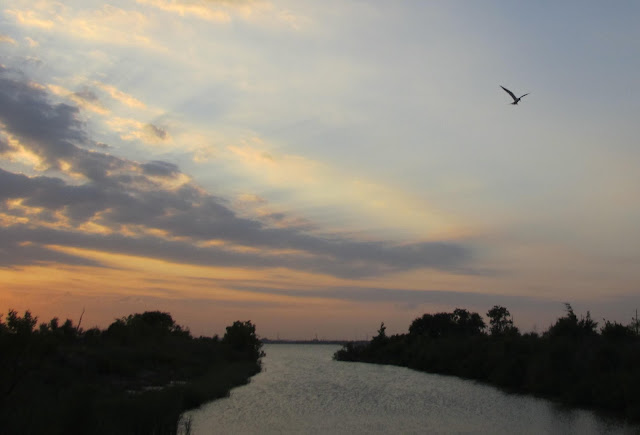 On the drive in, I had seen this Forster's Tern hovering above one of the bay inlets. On the drive back out, he was still there, so I stopped for pictures. 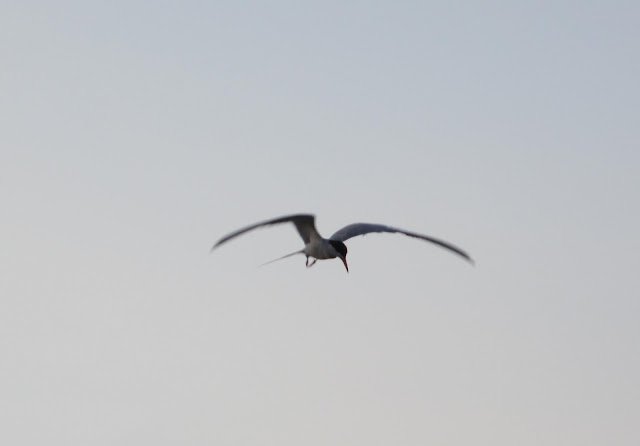 Terns hunt by diving headfirst into the water, and this one seemed to have found a great spot with wind that allowed him to essentially hover in place. After only a minute, he dived and caught a small fish right in front of us! There were many terns here today, as we're getting into tern season: they hang out here in the summer. I saw Forster's mostly, but also a small flock of Gull-Billed Terns (four or five species are seen here with some frequency).

To my surprise, the White Pelican from an hour ago was still there when we were driving out. 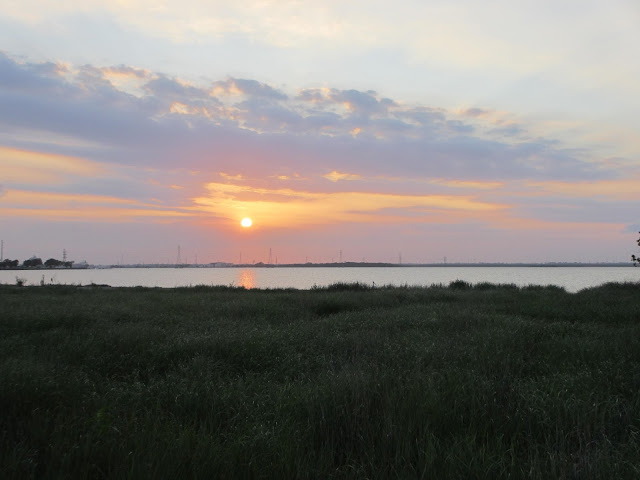 He was watching the sunset, I guess.

And just on the other side of the road: one of the many Yellow-Crowned Night Herons, with a full and beautiful breeding season crest. 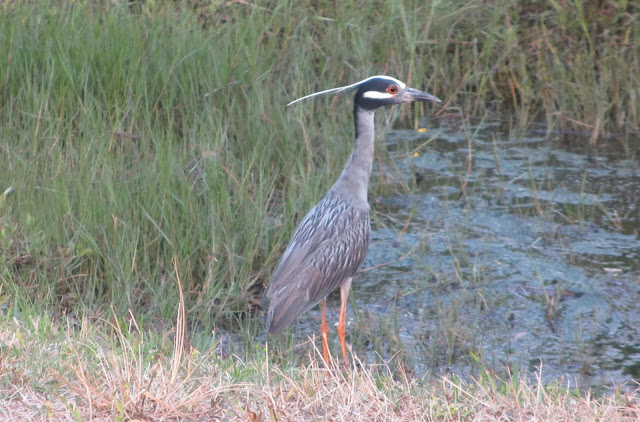 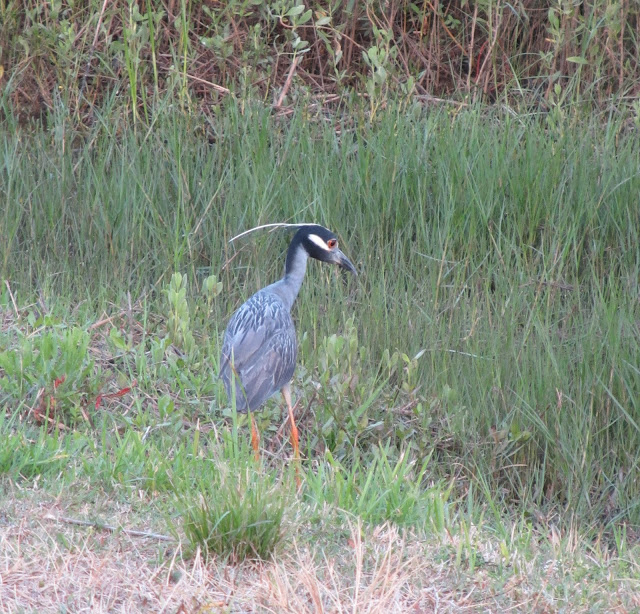 (eBird checklist for today's visit is available to view.)
Posted by Emily at 1:28 AM