A canoe trip through Sheldon Lake got us some close-up views of nesting water birds, such as this Little Blue Heron: 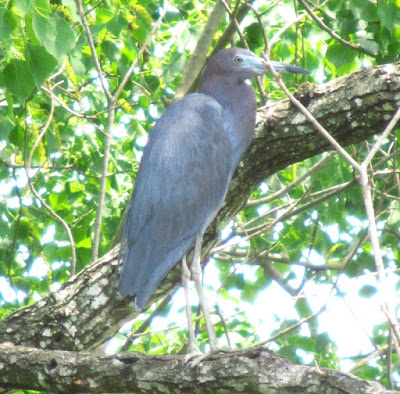 And these White Ibis: 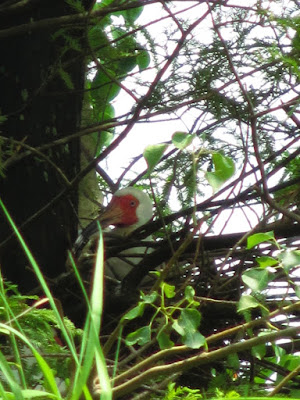 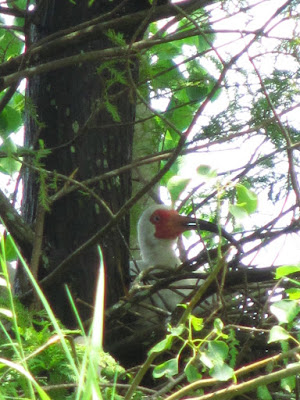 There are hundreds of birds raising their young on little islands in this lake, and quite a variety of species: Cattle Egrets, Little Blue Herons, Yellow-crowned Night Herons, Black-crowned Night Herons, Tricolored Herons, White Ibis, White-faced Ibis, Roseate Spoonbills, Anhinga - these are all the species I was able to spot nesting in the trees. And they're all clustered together, little groups of White Ibis among little groups of Little Blues, the occasional night heron or White-faced Ibis here and there. Little Blues, White Ibis, and Cattle Egrets were most common. The herons had young at all stages of growth, from tiny fluffy nestlings to adult-sized juveniles, but the ibis children were all still small enough to stay hidden beneath their parents, and many of the ibis were still in the process of building their nests.

My photographer for this trip was my brother Travis. I was steering the boat and identifying the birds, so it was a team effort. Two sets of eyes are often better than one when it comes to spotting all the cool birds! 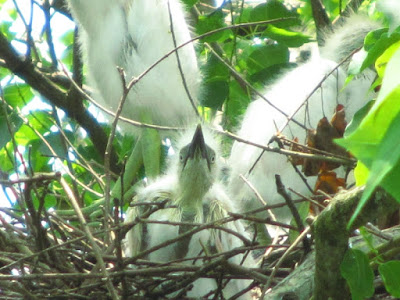 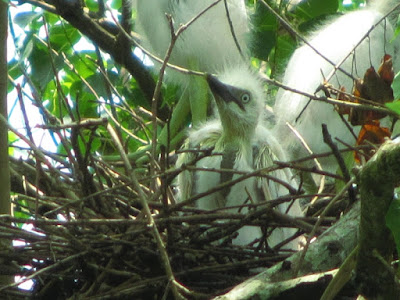 The Little Blue and egret youngsters were loud and boisterous, many of the older ones walking around the branches and flapping their growing wings. Sometimes they'd get overexcited when a parent came in to feed them, squawking, pecking their siblings, even chasing down and almost tackling the parent. Some of the parents would keep their distance when they arrived back at the nest, as their multiple almost-grown youths run up to them. I saw parents trying to run away from their own children when they begged too aggressively for food.

You can see here that there are three young Little Blues begging for food from a parent that - for the moment - is just sitting and waiting in the next tree over. The kids almost looked they were dancing as they bobbed their heads and flapped their wings, stretching up tall for their parent's attention. 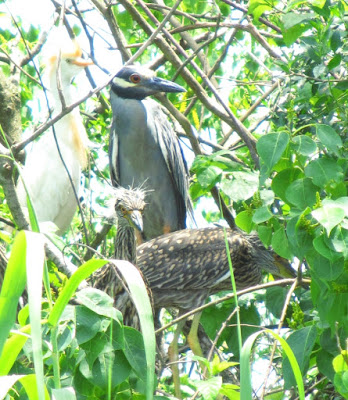 The Yellow-crowned Night Herons I saw all had mostly grown up children. All the black-crowns I saw were still sitting tight on the nest, with no visible kids. 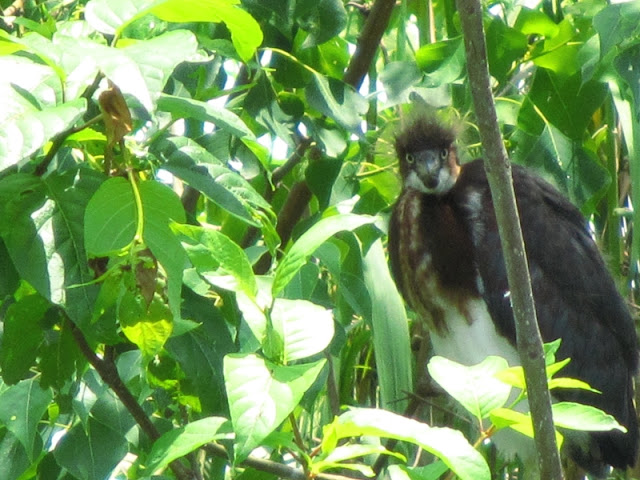 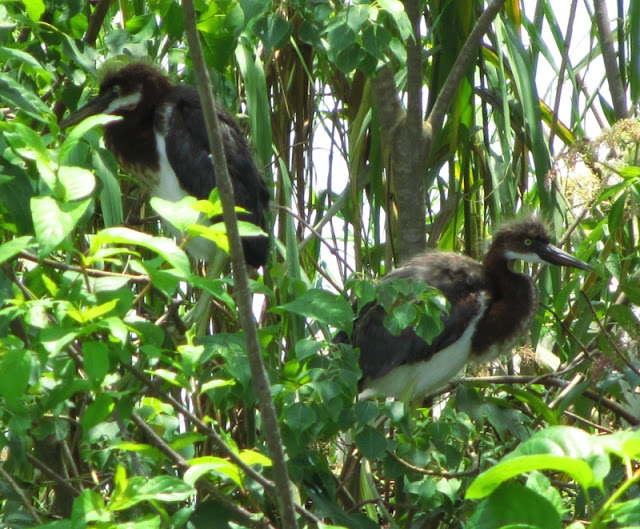 This was the first time I'd ever seen young Tricolored Herons! Unlike a lot of these heron kids,they've already got colors and patterns very similar to the adults. 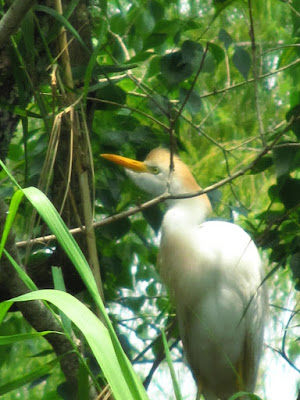 Another very exciting thing to see was a family of Moorhens! I describe these birds as "duck chickens", or water chickens - they swim like ducks, look a bit like ducks, but their feet and beak looks more like a chicken's. This family - two adults and four tiny, fluffy chicks - were foraging among the reedy plants at the water line, in front of the trees the herons were nesting in. 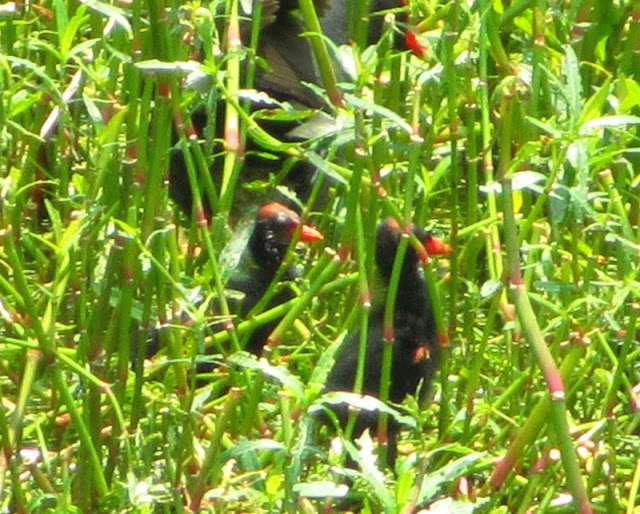 They were all out in the open for a little while, but then they started to hide - luckily we got this picture before they hid completely! Look at their bald heads! 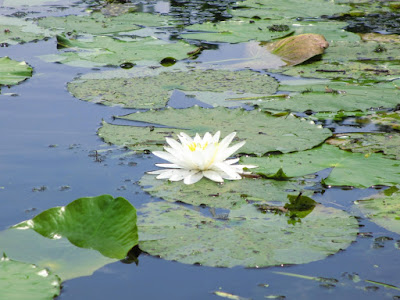 There were plenty of flowers, lily pads, dragonflies and butterflies around as well.

And, of course, there are alligators. A vital part of what's keeping this place safe for all those nesting birds. The gators might eat a few unlucky heron babies, but they'll keep all the egg-and-nestling munching predators away. 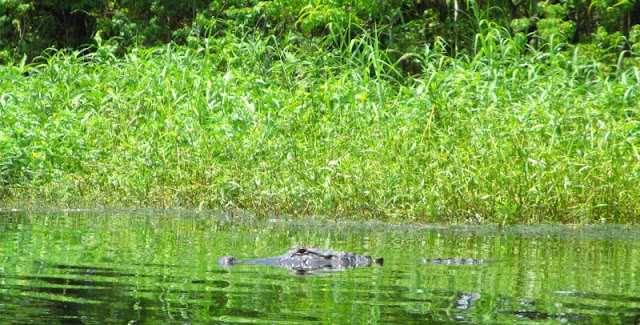 There were plenty of other birds around too, that may or may not have been nesting nearby, like blackbirds, seagulls, cormorants, and Great-tailed Grackles like this one: 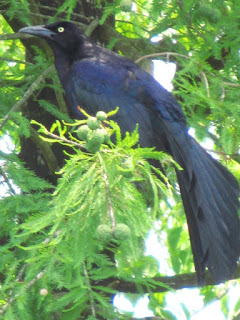 It was great to see so many youngsters so close, and to observe such a variety of wildlife. I'll leave you with one last picture, of a lovely backyard snail: