While it is possible to email all your friends the cool stuff you saw at the Magical Winter Lights display in Houston, if you have a blog, you can just put it all there, and then it feels like you're putting up a new page in a cool community scrapbook, instead of sending a letter or a few dozen stray files destined to get lost in someones inbox of I-never-ever-delete-emails-ever-even-the-junk-ones-from-Crazy-Tarot-Cats-dot-com or the all-consuming labrynth of someone's phone. I don't even want to talk about Facebook.

This was a journey made on one perfectly warm (70 degree) winter's night, with my little brother and my courageous mother. Said little brother (who answers both to "hey you", "frogger", "frogsauce", "super frog", and "Travis") was also the photographer to this trip, so if you like the photos you can say "hey, thanks, frogsauce", just like I would. 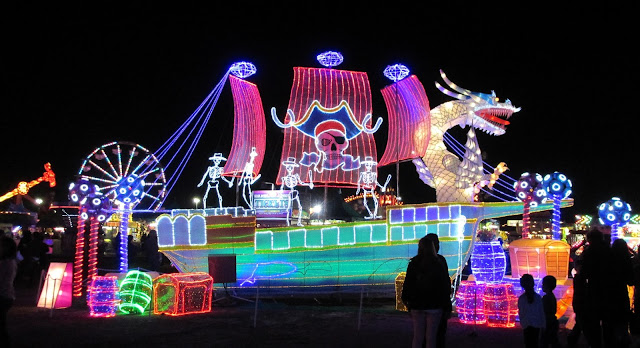 This is one of the first things we saw, and man, look at all these dancing skeleton pirates and their adorable hats. I don't know if I'm scared or completely delighted. They're great. Almost as great as that dragon. Almost. Wish I could give that dragon a high five for being awesome. 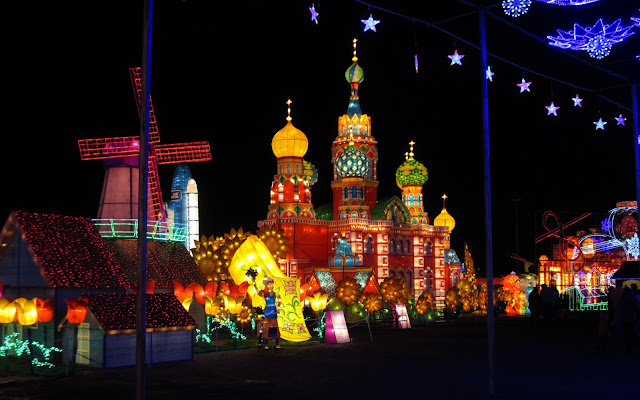 They divided all the lights up into countries. But the best country of all is, of course DINOSAUR KINGDOM. Everything else pales in comparison, and as such, I basically have no comment on these other much less impressive countries. I promise you, pictures from Dinosaur Kingdom are coming. I promise.