Bugs at the Birdie Playground

Much like a small child, my delightful and demanding Blue-crowned Conure loves to be taken on little outings to her closest playground, so she can climb and scream and destroy things to her heart's content. In my bird's case, this playground is the crepe myrtle tree in our garden. It's parrot safe (trees, though they may seem peaceful, can really be dastardly villains), and it's close to the house, so pretty safe for her and pretty convenient for the human who has to watch over her. Because, of course, she can't be left unsupervised. She'll start screaming her distress call the moment she's left alone anyway. We tried to take her on a walk once, thinking she might enjoy seeing some sights, and had to turn back because she was terrified of the mail boxes. If you have a small child, I hope she's slightly less fearful.

Other things that are very scary and alarming and have to either be attacked or fled from: the UPS truck; any unusual sort of car, like maybe just a color she hasn't seen before, especially scary if it decides to park across the street from us; unfamiliar cats; bowls from the cabinet; the pen attached to the fridge for writing on the grocery list; boxes that were not present in a room the day before; nail polish; bandages; any bird over a certain size flying over a certain height in the sky; plastic bags of any sort, but especially the big black trash bags.

Things she finds lovely and enjoyable, but are actually more dangerous than the cardboard box on the counter: dogs, the bigger and the barkier, the better.

Given the list (ever-growing) of strange things that terrify her - and hey, parrots are prey animals, I can't blame her - watching her on the "playground" is not just about watching out for predatory birds that might take her as a snack, or making sure she doesn't get caught by a gust of wind and fly off: it's also watching for the UPS truck. Or anything else that might set off an instantaneous panic attack.

You also have to keep up some verbal feedback. "Yip?" "Yip." "Ruff?" "Ruff." She wants to know you're paying attention, and engaged in this super-fun tree climbing time. You also have to look at her every now and then. Don't look at her for too long, and she'll think you're not paying attention, in which case she'll start making distress calls. You'll also be surprised at how quickly she can climb through the tangled branches, and just how invisible she becomes in the green foliage. If something happens, you need to know where she is anyway.


(and yes, my poor birdie plucks her feathers, which is why she's so bare in places; we're still trying strategies to solve the problem.)

There's also the odd "bird stuck in a tree" phenomena, where she climbs too high, doesn't understand the concept of climbing down, and proceeds to freak out because she's "stuck". If she does climb too high, preparations have to be made to get her down, including extra long sticks and possible assistance from other family members. We had to lure her down with a pop tart once, but we won't talk about that. (I think she's learned her lesson now and it's thankfully been years since we had to use that trick. If only she'd learn now that the bowls for my cereal are not deadly at all).

So, birdie playground time basically requires someone to stand and crane their neck up at a tree for up to an hour, armed with an arsenal of retrieval sticks. Meanwhile the bird has the time of her life, tearing off leaves, clambering around, sunbathing, chewing sticks, hanging from branches, looking at people or dogs in their yards across the street and saying "ruff" to them.

This is cute for a while but pretty soon your neck starts to hurt and it's kinda boring. Trying to read isn't that great between having to look up all the time and being interrupted by persistent "ruffs". Any work that requires consistent concentration is kinda a no-go. The bird wants all of your consistent concentration. So looking for bugs and stuff is kinda the best option. 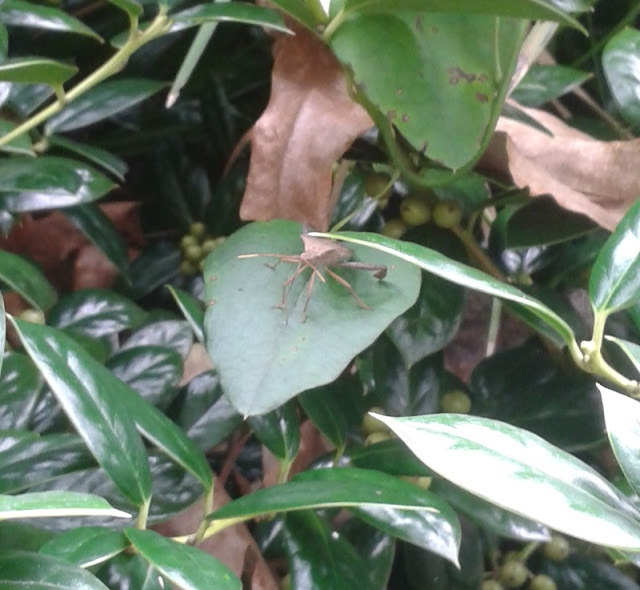 Such as this fine fellow. They're everywhere. They fly with a giant buzz from leaf to side of your house to wherever else they like to hang out. I don't know what they are, which is terrible. I wish the focus of this picture was better, but you can see this one's got its proboscis mouth thing stuck into the leaf! 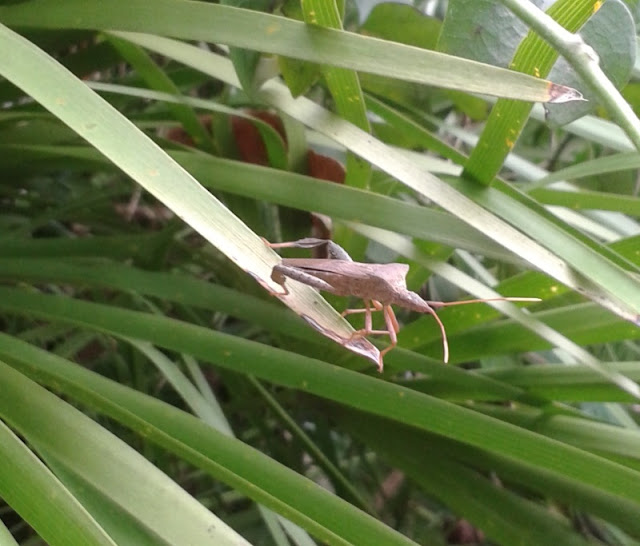 I found another one, very close by. 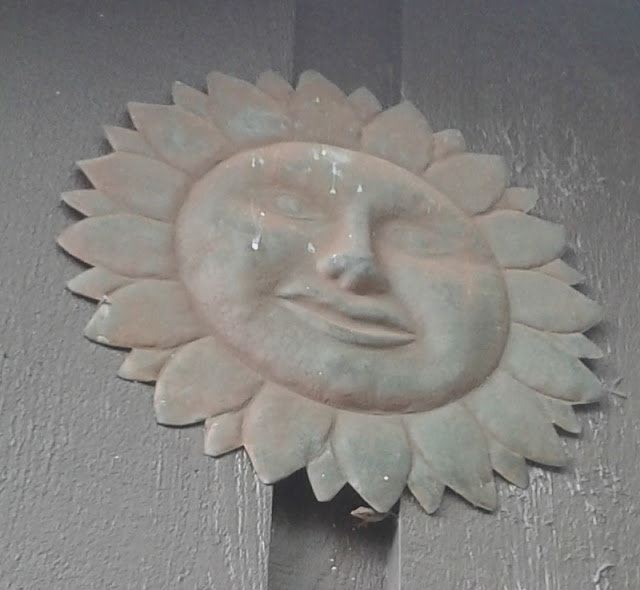 And look who else I found, peeking out from beneath the weird sun face that came with the house? A Green Anole, blending well with the house. 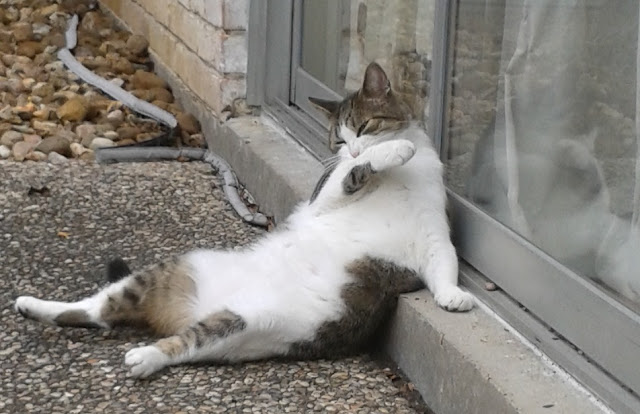 My cats are frequent company during birdie playground time, and Mr. Kitteh always likes to sit like this.


Now those are all things I found on a playground run back in November. What follows are some things I discovered on a slightly more exciting day in early January. 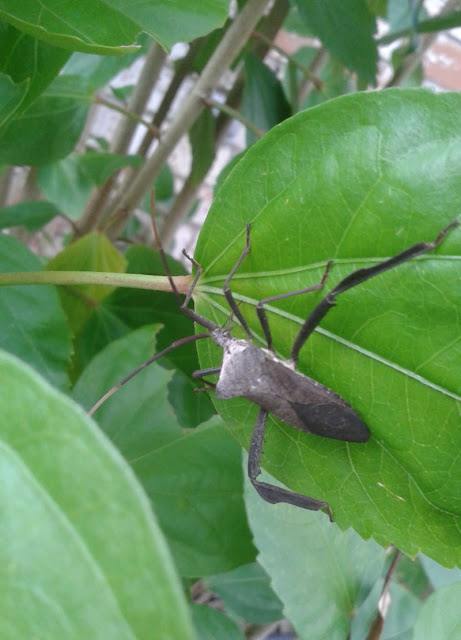 I'm not kidding when I say that these bugs are everywhere! They're a pretty reliable find. Now the ones from November did look slightly different, but the overall form is the same, so I don't know if these are different species or what: I'm still totally clueless, I don't know what they are, I'll find out someday. And yes, it's as big as it looks: an easy two inches long, three across with the width of its legs accounted for. When you see these flying through the air, you get out of the way.

Now, bored as I am looking after my cute bird in the tree, I pick up a curling dead oak leaf that had been sitting on my weird giant leafed tropical plant (I'm not a botanist). Lo and behold, look what rolled out of it, to my enormous surprise: 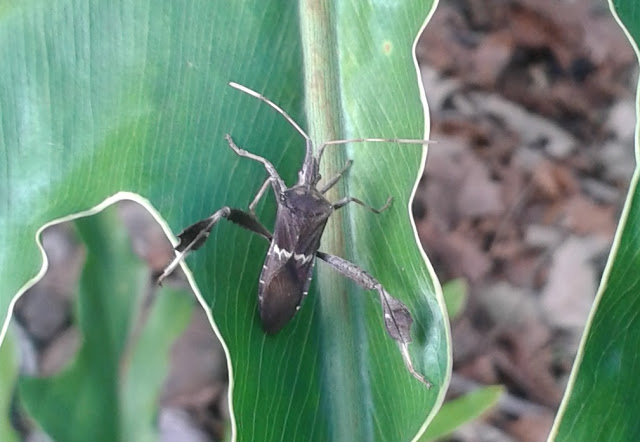 A much smaller one of these buggys, only about an inch or so long! I suppose it was hiding or napping inside the leaf, maybe. 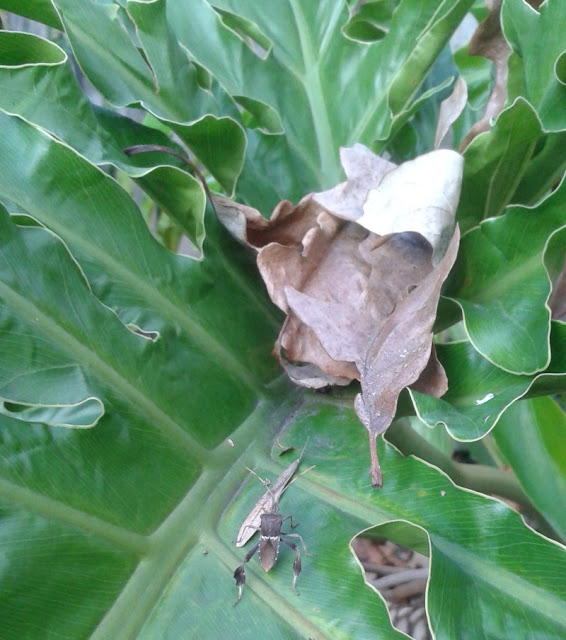 I left the buggy alone, put the leaf back, and slowly, slowly, the little buggy crawled back, until eventually it had disappeared back into the leaf from whence it came. Such an exciting story! 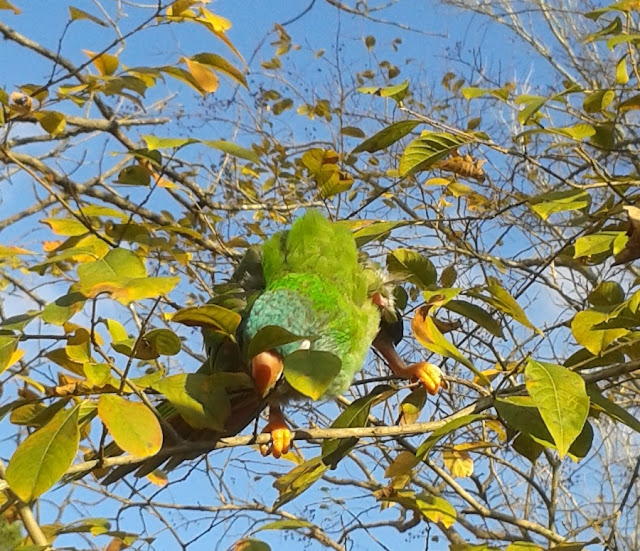 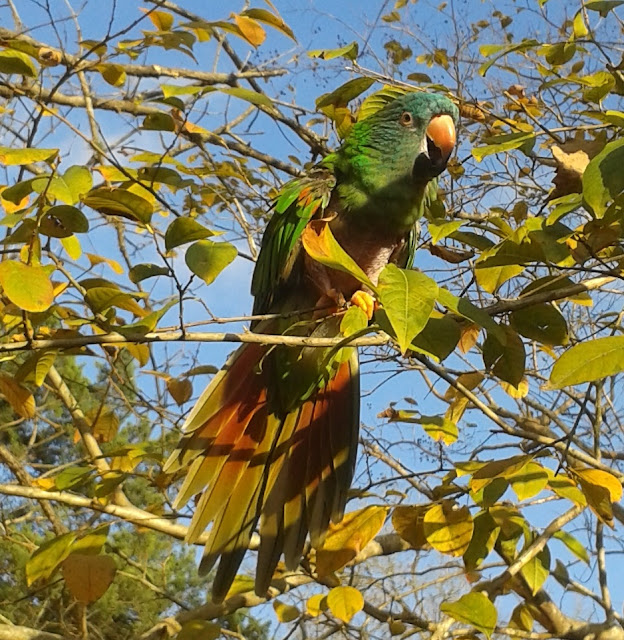 Cedar Waxwing songbirds are still around, going "see see see see" as they browse the neighborhood. I also hear one of the neighborhood's Barred Owl's rising early, with those booming musical whoooos, always a delight. The usual gang of Blue Jays is hanging out, and some sort of chickadee or titmouse is making a fuss over something. I'm busy examining what's happening on a branch of my hibiscus plant. 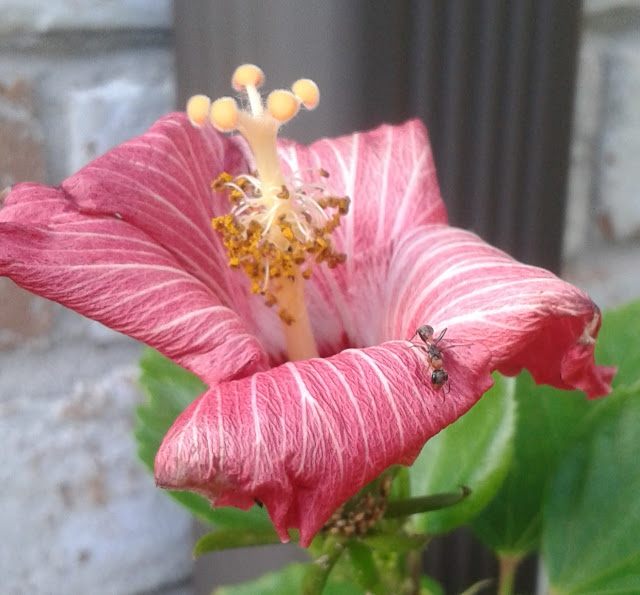 One of the flowers is withering. This wingless wasp, which does look very much like a large ant, investigates the blossom. I have a healthy respect for these fellows after one of them somehow managed to get on my face while I was in a car and stung me right next to my eye. It hurts, and I would recommend avoiding the experience. 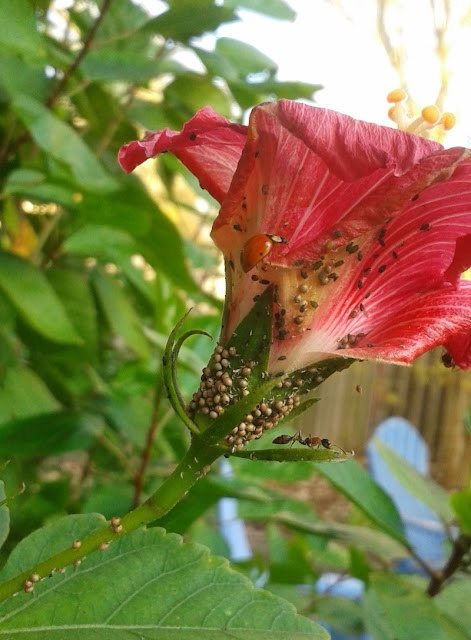 A quick glimpse to the underside of the plant reveals a huge number of what I would guess to be aphids, accompanied by a ladybug (same color as the flower), and multiple wingless wasps, all of which I hope are feasting on these little beasts, since I would guess they're responsible for the flower's wilt. It's quite the congregation, and I was excited to have discovered them all! This is the first time I've witnessed such an infestation on one of these flowers. The hibiscus plant, in this current month of April, is blooming insanely wonderfully with about twelve flowers, none of which seem aphid affected at all.

Another event of the day was that the holly plant had its little flowers, and the bees were going crazy over them. Berries were out in full, too. 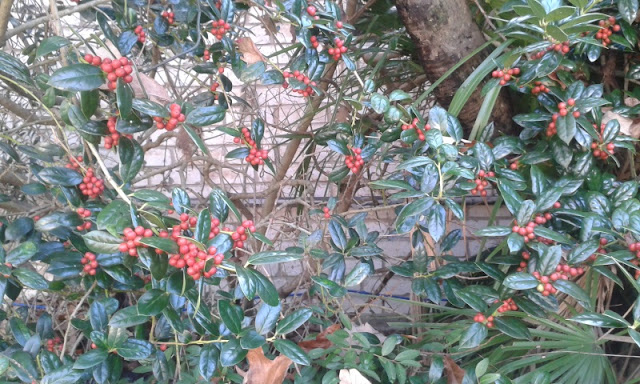 This plant is mainly notable only because the bees like its flowers, various birds like to hide in it (Mockingbirds especially), and lizards clamber through it. My bird wants to clamber through it too, but the leaves have sharp points and it's probably not parrot safe, so her access is denied.

That's all I've got: some bugs, some birds. It's an exciting world out there, and I'm not often bored.
Posted by Emily at 11:13 PM 1 comment: