Part three of the series! Because I am behind on entries (you can add malfunctioning computers to my list of ailments!), please note that these events transpired on November 30th, 2015!


Alas, we could find no goose or mallards at the duck pond this fine day! Actually, there were no ducks there at all, not even the fairly numerous Muscovys. So we went in search of our favorite waterfowl, exploring other areas of the park, walking through mossy trees, disturbing half a dozen squirrels.

Finally, we found some Muscovys! My brother had brought along some bread especially for them.
After the Muscovys had been nibbling on the bread for a few minutes, I noticed something interesting: one Black Vulture had flown in to a nearby tree. It then flew to the ground, not too far away from us. Interesting!

But then one more showed up. And then another. And another. They began to move closer to us. 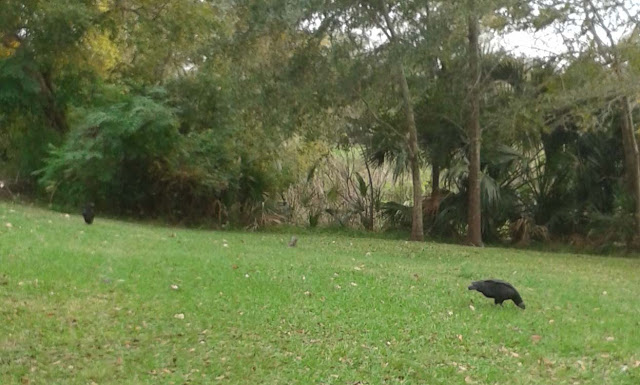 They seemed to be looking around for food in the grass.
Their numbers grew, and suddenly, they were very close. 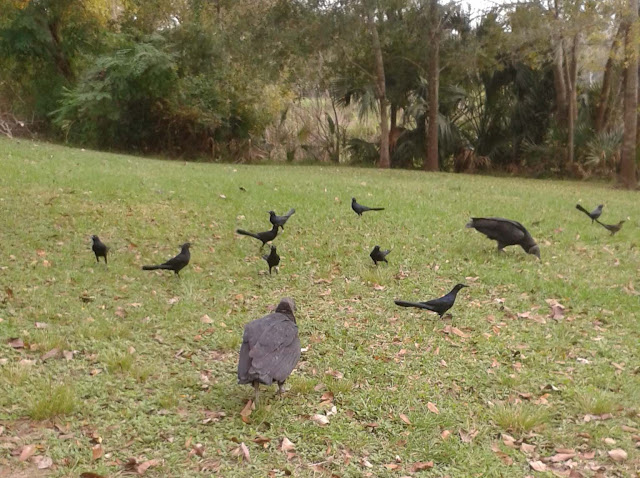 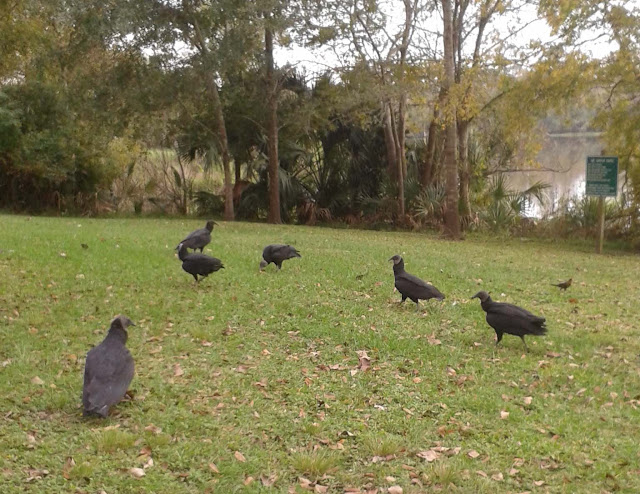 My brother threw a piece of bread towards them, and they were in on the action almost instantaneously.
The entire flock was galloping over to us at high speed. 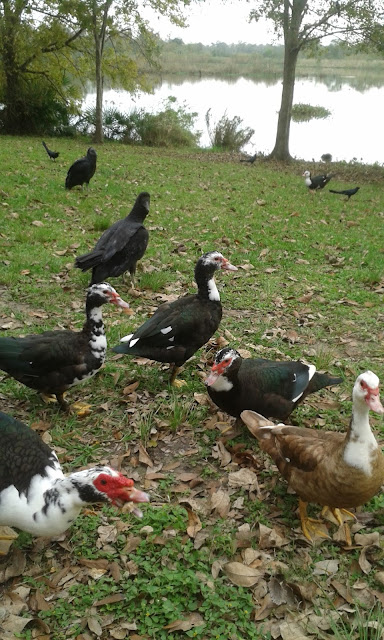 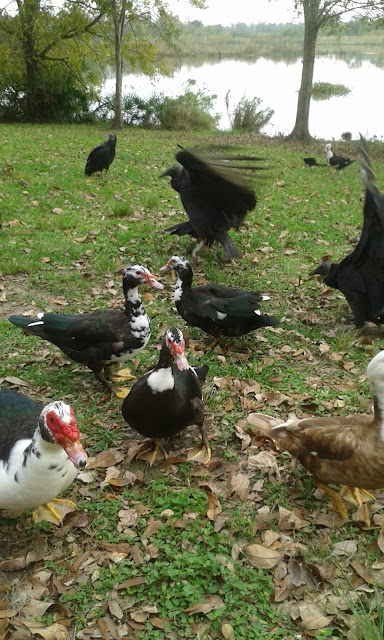 I was immediately struck but how very differently vultures move from the other birds I'm used to watching. This was my first close encounter with wild vultures. Normally I see them soaring high in the sky, or settled down on a street lamp, or even standing at the roadside waiting for a chance to access roadkill; not running around on the ground by my feet.

Galloping seems like the only polite way to describe their movement. Skulking like a goblin would be another way I'd put it. I must confess to feeling a little creeped out by their sudden movements, all creeping gallops and hops, often moving about with heads ducked in and bodies held low to the ground, with the occasional long hop accompanied by a burst of wings. I couldn't help but feel slightly threatened, suddenly surrounded by this strange group of skulking winged goblins.

Their movement seems bold, their intentions sharp, their personalities dynamic.

I don't feel like words do them justice at all, so I implore everyone to watch this video, to get a better sense of what I'm talking about. Watch their intense flurries of activity and competition, at one moment bold and direct, at the next cautious and hesitant.

One of them landed on the trashcan right across from me. It only nibbled at the bag a little bit. These vultures got very close at times. One of them even came close enough that it could've touched my shoe. 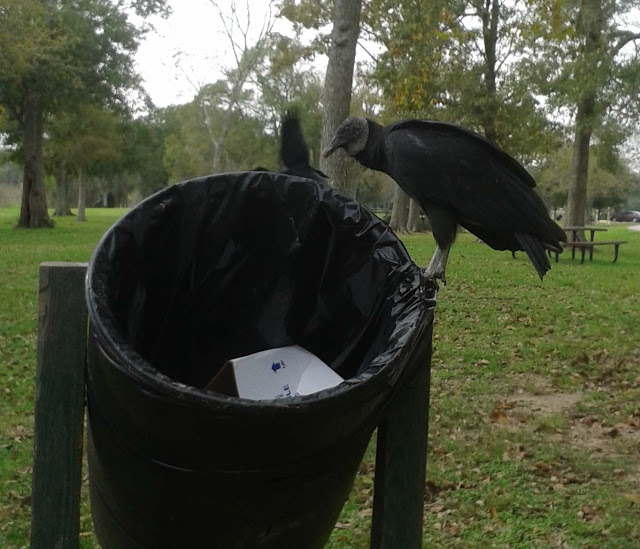 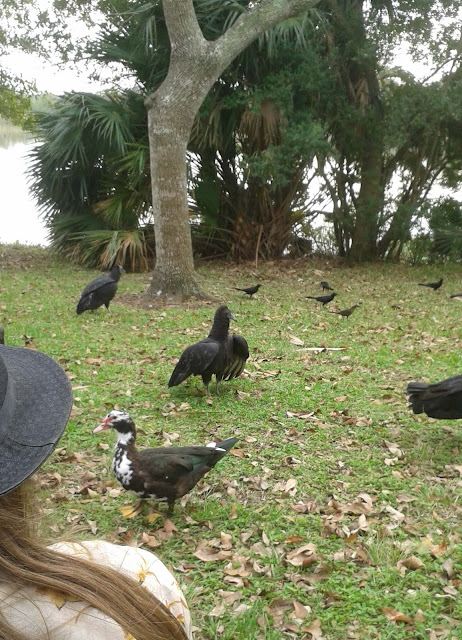 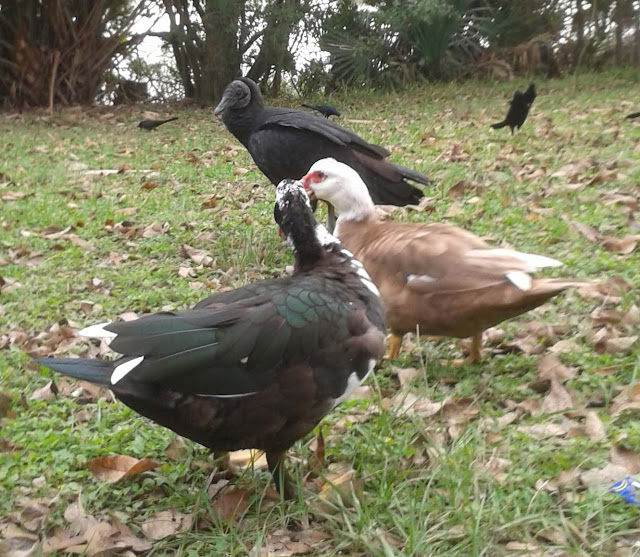 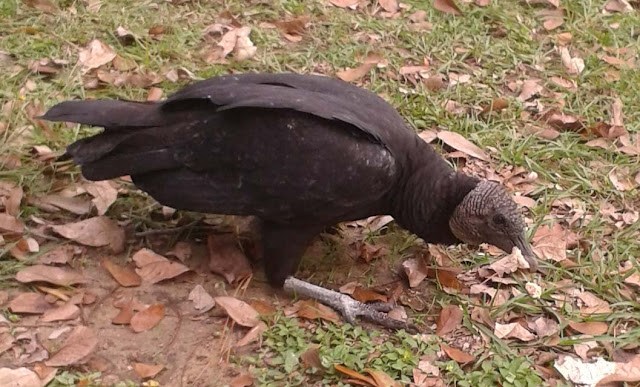 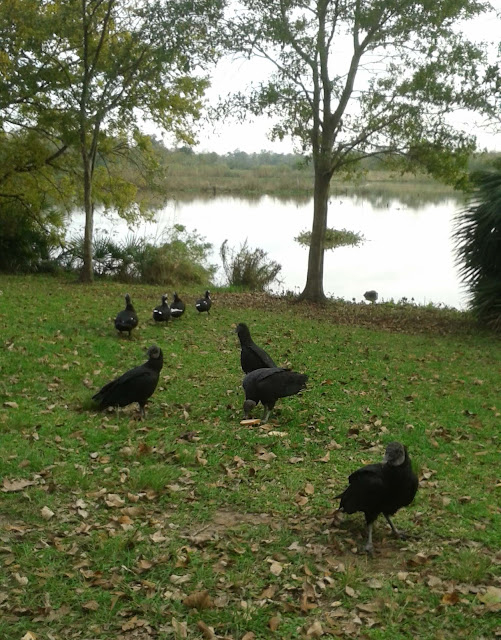 You can see here that most of the ducks were finished with this frenzy, and began making their way down to the shore of Armand Bayou. The ducks laid down next to the water, their backs to us. The vultures stuck around. 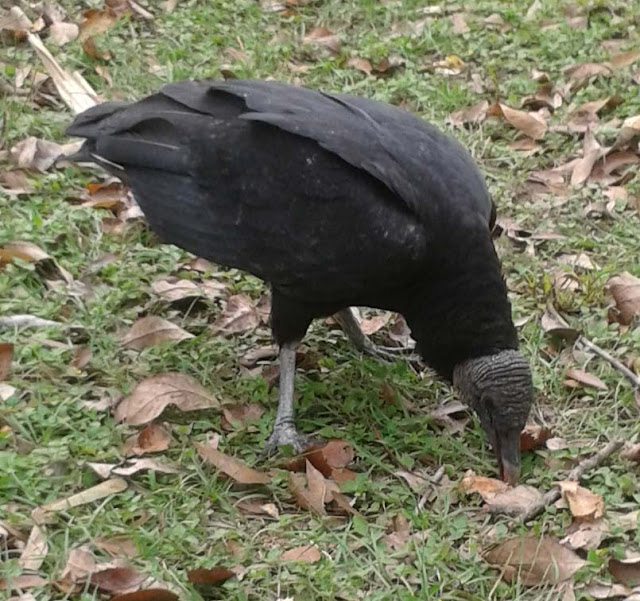 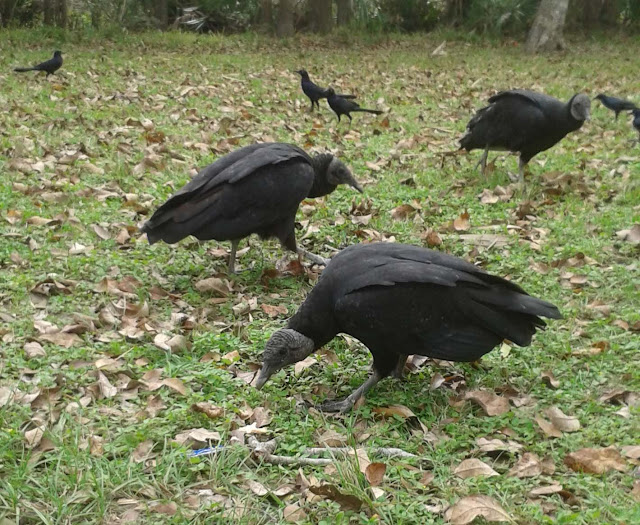 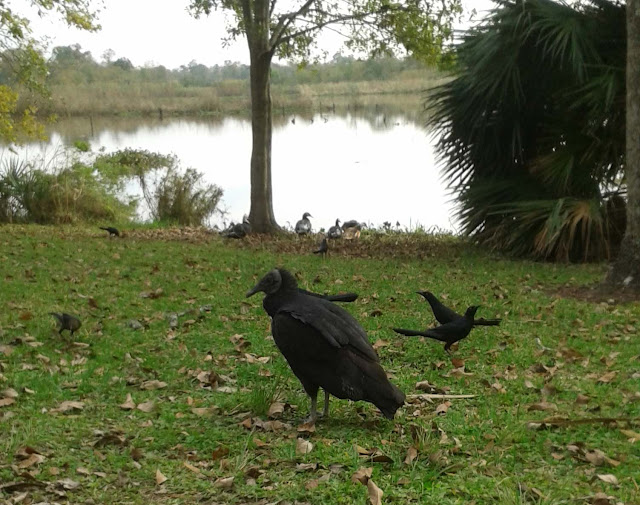 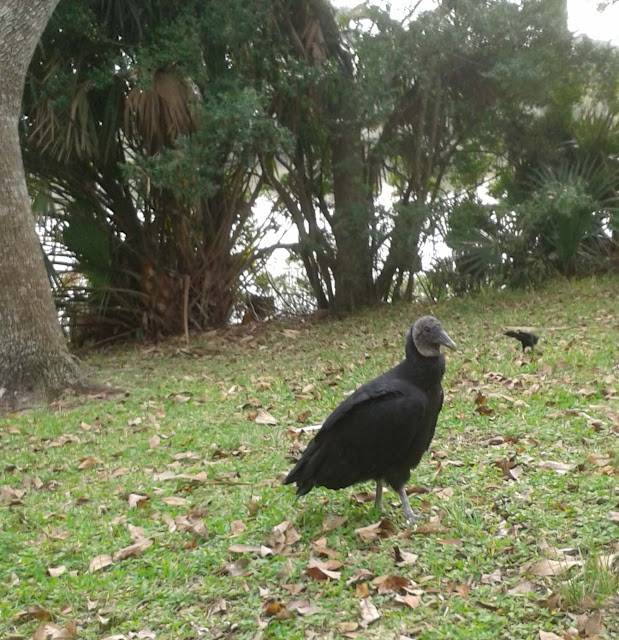 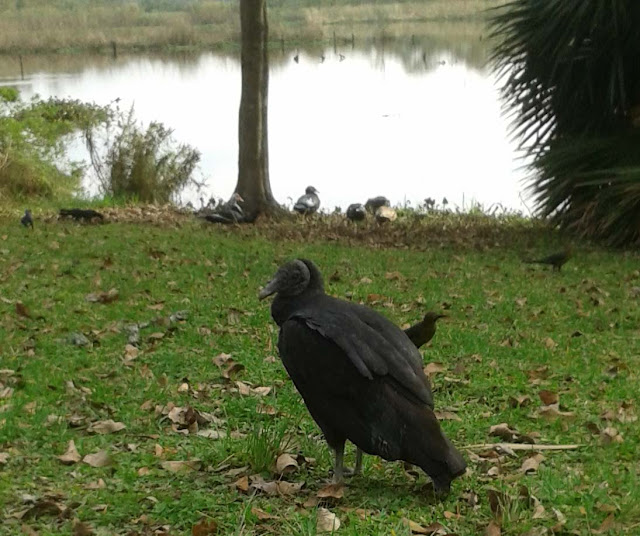 I really loved watching them. It was something exciting, new, and entirely unexpected for us.
These vultures are fascinating birds that I found very entertaining to watch.

Also visiting us on this amazing day was a sizable flock of Red-Winged Blackbirds, which mixed occasionally with the Great-tailed Grackle flock.


Another somewhat unexpected sighting were two tabby cats, one orange and one brown, slinking out of the bushes to go lounge in the parking lot. The original frenzy of the vultures was dying down almost as quickly as it had begun. Many had lost interest in the bread, and the flock began to fan out. A few of the vultures went in the direction of the parking lot cats, and I watched with interest, wondering how far the cats would let these birds approach.

Turns out the answer is: pretty close! And here's where I put in a little note of remorse about how one should always take good notes when you're out in nature observing, because you may think you're going to remember everything that happened, and, oh, you're gonna write that blog post in two days tops, all the details will get in there. But then you're sick and busy and months go by and you forgot what transpired between the cats and the vulture. Did the vultures seem interested in the cat? How much was the cat ignoring them? Did the cat walk away at this point, or did the vultures never get closer than this? All lost now because I didn't write it down right away.

Another thing I didn't make strong enough note of is that one of the vultures seemed very slightly different from the other, both in appearance and in some behaviors, and I thought this might be a young individual. But having not noted down exactly what those differences were, I can't report them here, and it now only counts as yet more lost information. 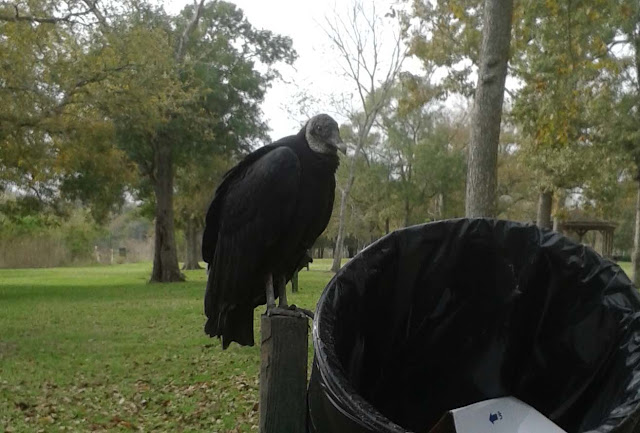 In the following picture you can see that a few vultures just decided to sit in the grass!
One of them even laid down completely! 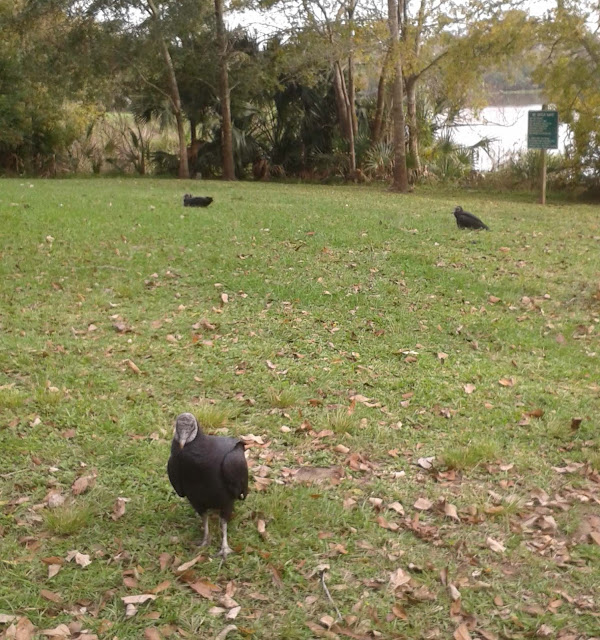 Even they slowly began to gather together in the nearby tree, lining up on the branches one by one. At this point, we felt it was time to move on, finish our search for the goose, and head on home before it got too late.

We also saw three cats total, and one rabbit! I realized on this day too that I'd never bothered to count the squirrels that I see here, but it seems, at this point, a little unfair to just ignore them. Might start keeping track of that in my later adventures here.

I'd also like to point out that we have not seen the goose or the mallards here since mid November. We swung by several times in December to look for the goose especially, with no luck. Where did they go? Will they ever come back? It's a mystery.